Working for Moose Coffee - an interview with Csilla | News

Ahead of our Moose Coffee Recruitment Day at Plaza 1821, we spoke to Csilla, a Team Leader at Moose Coffee who has been with the company for over five years, to find out what it's like to work there.

How did you get started with Moose and what drew you into applying there?

I’ve always worked in hospitality, but wanted a better job, to be honest. I was a fan of Moose Coffee and enjoyed their food, so one day I just asked if they were hiring and I was invited for a trail in their Dale Street store, which ended up being successful.

That’s a nice start, so what has your career progressed during your time with Moose?

I started as a team member on part time, before becoming a full-time barista on Dale Street. Which I really enjoyed. Although at one stage I took a gap from Moose, because I wanted to try some new things, so I Ieft Dale Street, and in the span of a year I ended up having about three different jobs, none of which I liked.

I got in contact with Sophie from head office, to ask if I could come back, which is how I got a position in the Hope Street store. From there, I started as team member and was quickly promoted to an Assistant Manager position which I really enjoyed. Although, the feeling of wanting to try something new returned, so I applied to go to college. I spoke to management about going to part time and said I won’t mind being a team member again. It was risky to ask for a voluntary demotion, but I was offered to stay on part time as a Team Leader, and they were very supportive of me. No one was obligated to help like that which I’m so grateful for, and I feel rewarded and appreciated, which is always nice.

Did you do any training or development while with Moose?

Yes. There was always some kind of training and someone teaching me something new. I’m the kind of person who is always looking to learn and I think that’s the best way to be.

What do you love about working with Moose Coffee?

Being appreciated, but not just that. I love the team and the people. In any team I worked with, in Dale street Hope street, Crosby, Manchester, anywhere, everyone was great. I love getting to know new people and every single person I met was nice. I’ve made friends here that are long life connections. You go in with a positive energy and people feed of it which is great because I’m a very people person, at least I hope so.

How is Moose different from other hospitality jobs?

Taking care of the workers, and they appreciate hard work. Especially, during the pandemic. We were always given information; the communication was great. They made sure no one lost a job and they told us how they wanted to keep us, which I think was handled very well. They gave us a sense of security, and with the furlough they made sure we were being paid when everything was super uncertain. 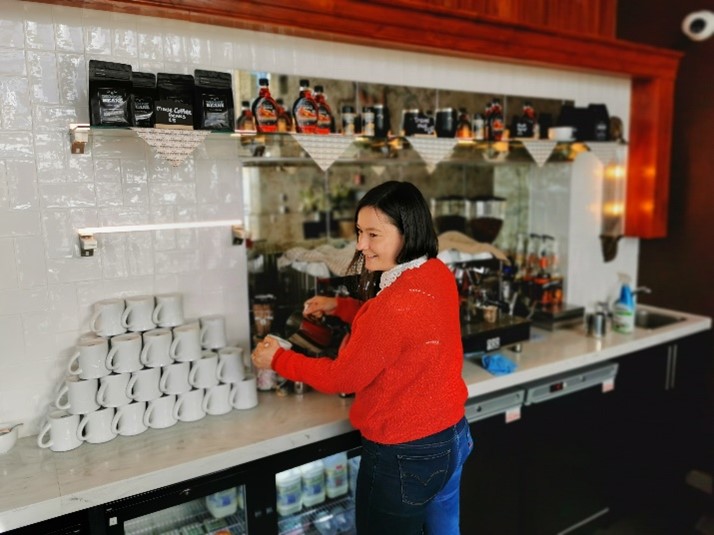 What are the benefits working for Moose?

The hours. They are very sociable, so you can work the morning and afternoon and have the evening to yourself. Saturdays and Sundays are busy, but I love the buzz from them. Sometimes I live for a little chaos. But I love being part of an awesome team and meeting with customers. I’ve worked in places where there was clear divide with floor staff and the chefs, but there is none here, everyone gets on well.

What would you say to a young person who’s considering applying for Moose?

Have the willing to work. Want to work, want to learn, want to pick up skills. I would recommend this job to others, and I have to some friends, but only if they were the right fit.

What’s your favourite thing on the Moose menu?

Impossible question! Ok...here are a couple. There is the Manolito, which is like an open tortilla, and its veggie and I love it. The Green Line, which is like potatoes, vegetables, poached eggs, it’s very nice. And then the apple and caramel pancakes with ice cream, but you’ve to eat it with a little bit of pancake, bit of ice cream and let it melt a little. It’s so good. The salted caramel is the best, it’s made fresh every day.

Want to know more? Come along to our recruitment event on 20th October, 10am-12pm at Plaza 1821. Contact Aaron Unsworth to book your place - call 0300 123 8088 or email aaron.unsworth@thelearningfoundry.org.uk